Perhaps, almost every individual is aware of the great land of America. Well, the country has established itself as one of the leading superpowers of the world. However, there is much more to the nation than mere titles, and that is food!

The United States of America (also known as the US or USA) is the world’s third or fourth biggest country by land. It also holds the position of being the third most populous country.

Apart from this, the country has a diverse and eccentric cuisine. From apple pies to burgers, the nation has gifted the world with some delicious, innovative foods.

American cuisine brings together a variety of dishes and fuses them to create an assortment of innovative dishes. Typically, American food represents the history of the country itself. It blends and merges cuisines from different parts of the world to create one exotic collection.

Over time, several synonyms to American cuisine have persisted, including fusion cuisine and global cuisine. Although the cuisine is fusion, it got heavily influenced by different nations during different times. In the earliest times, the European settlement in America introduced their ingredients, cooking methods, and style that persisted for a long period.

These colonists settled in various regions of the American land and started farming. They used their significant style that altered the ways of the local Americans. Hence, the people of America got to know about the French, Swedish, Dutch, and British cuisines.

During this time, the usage of deer, bison, wild turkey, bear, rum, molasses, fats, and oils was immense. However, even at that time, the southern American cuisine was different than the northern. Unlike the southern, the northern agricultural diet was not so diverse and complex.

Then, the Progressive Era of the 18-20th century came, and the traditional American food evolved incredibly. Industrialization took place, and the influx of immigrants increased.

There were two major consequences of these changes. One, people from different world regions introduced their cuisine, flavor, ingredients, and dishes. Thus, changing American cuisine into a global one.

Primarily, there are four major divisions. These include:

Northeastern United States Cuisine comprises of all flavors from New York City, New England, and Philadelphia. Hence, the cuisine mainly comprises seafood, including lobsters and clams. Other than that, you will also find the cuisine dominated by soft food like pretzels, whoopie pie, cheesesteak, German Butter Cake, and Funnel Cake.

Phenomenal dishes from Chicago and Cincinnati make up the Midwestern United States Cuisine. These places mainly produce grain like wheat and soy. Thus, the meals from this cuisine are generally satisfying and nutritional—for example, Chicago’s Deep Dish Pizza and Cincinatti’s Goetta.

The Southern United States Cuisine is a collective representation of all the heavenly flavors from Kentucky, Cajun, New Orleans, Low Country, Floribbean, etc. All the southern flavors have a rather heavy nature with the barbecuing and frying. People with a liking for spicy fast food will certainly find this cuisine intriguing and fascinating.

The Western United States Cuisine comes from California, New Mexican, Pacific Northwest, Hawaii, etc. Although the cuisine comprises a good number of innovative and worth-trying fast food meals, you will find the cuisine dominated by fresh fruits and vegetables. (And often weird combinations!)

The key ingredients that you are likely to find in a typical American kitchen, pantry, or more accurately, the prepared meal includes:

As mentioned earlier, American cuisine is quite diverse. And so, these are only a few of the many staple ingredients in an American kitchen. However, they sure are one of the most dominant ones. Almost every other dish comprises of at least one of the ingredients mentioned above. Also, when it comes to cheese, Americans mostly prefer Queso Fresco. 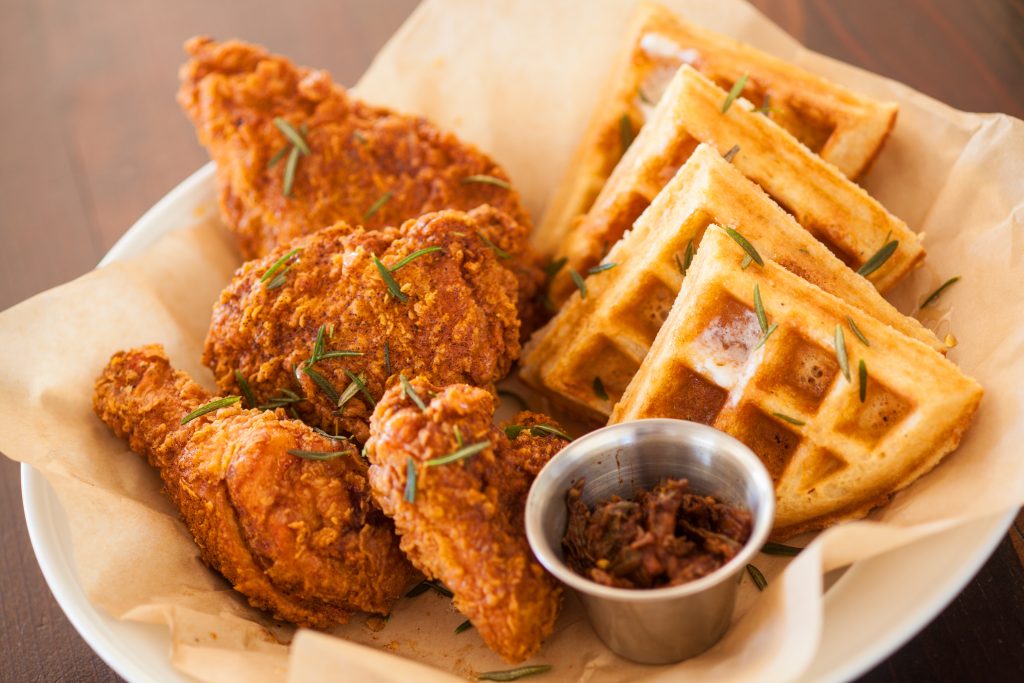